As you will have noticed, Grillo Oriental Rug has a number of categories for the rugs we sell.  To help you understand them, you can read below for an explanation of some main categories.

There are three disciplines that historically produced hand-woven Oriental rugs that are the same regardless of the country of origin.  A good schematic for understanding them is City, Village and Tribal. City and Village Oriental Rugs designs are often also described as Formal Floral and Informal Floral.

FORMAL FLORAL designs,  which can also be referred to as “Curvelinear Floral,” have a pre-planned design.

The design is drawn on graph paper which can then be faithfully copied by the weavers. It can also be  written out line by line horizontally the length of the rug — this document written on parchment is called a Talim. In the case of wide rugs that require more than one weaver, there is another assistant to the weavers who calls out the number and color of the required knots. This pre-planning becomes evident in the four corners of the border of the rug which are identical.

Another integral aspect of this style of weaving is that the rug is being made expressly for sale. Formal Floral rugs like this are produced by companies who employ a team of people to produce the carpets.  They include designers, dyers, weavers, and those who shear (trim), wash and finish the carpet. 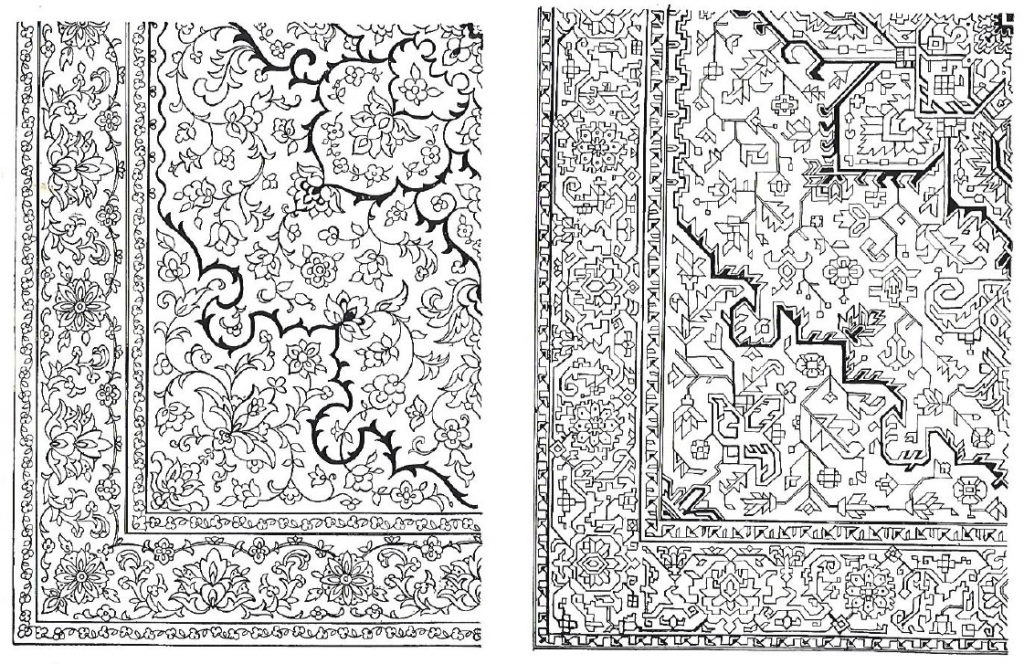 INFORMAL FLORAL  rugs,  also referred to as “Rectilinear Floral,” were originally made in the countryside by women who produced rugs for their own homes.  Additional rugs could be produced to be sold, providing income to her family.  This became a common practice once demand from the West became high.

The designs of village rugs can be patterns traditionally historical to a particular village that the women often learned as young adults from their family members or other women in the village.  Sometimes the designs are interpretations of those seen in the City Rugs.  They have a less detailed somewhat rustic appearance.

These villages have  their own specific techniques of weaving that along with the traditional design of that village identifies that village.  Remarkably they work with no graph or talim but the design is carried in their heads and woven from memory.  Typical to this type of weaving is that the design in each of the four corners of the border often gets worked out differently. 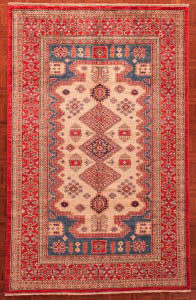 Throughout Iran, Turkey, Afghanistan and Pakistan are numerous tribal ethnic groups often divided into sub groups.  Today, tribes which were once nomadic now live as more sedentary villagers, moving their herds of sheep according to the seasons.  Many of them are prolific weavers producing not only rugs but various other trappings such as saddlebags, tent bags and decorations for personal use.

Marriage-age women historically made many of these textiles for their dowry.  The designs they employ are essentially geometric along with some highly stylized floral motifs.  The designs are learned and then carried by memory to the weaving without any pre-planned design.  Like village rugs the designs are part of an inherited cultural tradition.  Some of these designs are an emblem of the tribe itself. The Turkoman tribes are a good example of this.

Designs often use simple geometric patterns, but not always – as these two carpet examples show.

This post is part of a new series that explains more about the background of the Oriental Rugs / Persian carpets that Grillo sells. Stay turned for more information that will help you in the rug selection process.  We know that informed customers make better decisions. Have a question about how to buy a rug?  Contact us.

We Pick Up & Deliver

We offer a very convenient pick-up and delivery service or, if you choose to bring your rugs in to us, you can save 25% on your Oriental rug cleaning order.